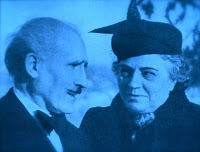 “I want you to go to Milan and get him. The American radio listener deserves the very best in music. All we can lose is a few weeks of your time and the expenses of the trip. No more cables. Get on a boat.” That is what, back in the fall of 1936, RCA president and NBC chairman David Sarnoff told New York Post music critic Samuel Chotzinoff, whom Sarnoff made musical director at NBC. The man “Chotzy” was to go get was none other than the legendary Arturo Toscanini, born on this day, 25 March, in 1867. Earlier that year, Toscanini had announced his retirement from the New York Philharmonic Symphony Orchestra and, on 1 March 1936, he had conducted what he meant to be his final radio concert as guest conductor of the General Motors Symphony. Nearly seventy, Toscanini could hardly be expected to jump at the opportunity of raising his baton in a series of weekly broadcasts; but that is just what General Sarnoff had in mind.

Chotzinoff, who was a friend of the temperamental Maestro and later recalled his career in the somewhat less than faithful Intimate Portrait, sailed for Europe, to make Toscanini an offer he could not refuse. He was promised an orchestra “hand-picked from the finest virtuosi available,” along with the enticing sum of $40,000 and the offer to have his income tax paid by the network. According to Thomas DeLong, it took a shrewd businesswoman, Toscanini’s wife (pictured above), to convinced Arturo that it was worth his while to return. The best part of the deal, though, was getting away from Mussolini, whom Toscanini openly despised.

The first of the Saturday evening concerts, broadcast live from studio 8-H at Radio City, New York, was heard on Christmas in 1937. As Francis Chase wrote in the October 1938 issue of Radio Stars, a studio audience of

over 1,400 persons sat breathless as the white-haired, flashing-eyed, dynamic little figure of Toscanini mounted the podium before one of the greatest symphony orchestras ever assembled; certainly the greatest ever presented wholly for the radio audience. The finest instrumentalists from many great American orchestras sat beneath the master’s baton, while in the brilliant audience, listeners hardly breathed. There was not the faintest rustle of a program (so that no slightest sound should mar the transmission, programs had been printed on silk).

Less attention was paid to the studio acoustics, which, as B. H. Haggin argues, were “unresonantly dry, flat, hard and made airlessly tight by the audience which filled the studio.” That did not stop the perfectionist from demanding the best from his orchestra, and, judging from the rehearsal recordings shared on NBC’s Biography in Sound tribute, aired on the day after Toscanini died, the Maestro was fierce in his criticism. “Do you believe that I am crazy?” he asked the performers, not waiting for a reply. “No,” he insisted, “sensitive.”

Year after year, the aging and only very gradually mellowed Toscanini vowed to retire—but for seventeen seasons he returned to the studio until, on 4 April 1954, he stepped from the podium for the last time; having faltered and dropped his baton during a performance temporarily taken off the air and replaced with recorded music, Toscanini walked off for the last time, before the orchestra had played the final chord. He was eighty-seven years old.

The stick with which he conducted the NBC orchestra (if himself not always too well), must have been a kind of crutch to Toscanini. It not only kept him going, but had America begging him to return. It enabled him to hold together a body of artists, at an age when most men can barely keep theirs from falling apart.

4 Replies to “Many Returns, Mostly Happy: Toscanini at NBC”