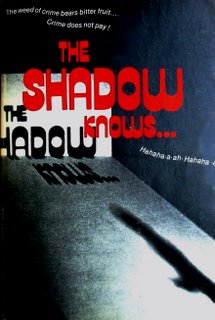 I remember the first time I heard the menacing voice of The Shadow—and it was not over the radio. I was a college student in New York City and was cleaning the Upper East Side apartment of a fading southern belle. Well, I needed the cash and she was too much of a spoiled socialite to do more around her place than pet her Shih Tzu and point out the offending dust particles. She told me about some prank phone calls she had been receiving from a rather peculiar and not-so-secret admirer in her neighborhood. I think she had filed a restraining order, but that did not stop this cookie character from entering her sphere telephonically. The eerie message he left on her answering machine, which she did not hesitate to play back for me, was as ominous as a line from David Lynch’s Twin Peaks. It was not ‘Fire walk with me,’ though, but “Who knows what evil lurks in the hearts of men?” followed by a declarative but less than clarifying ‘The Shadow knows!’ Sinister laughter concluded this bizarre tele-communication. Let’s just say I was glad to put down the feather duster that afternoon and make off with my meagre earnings.

Several months later I came across those very words once more—and I could not get out to escape them, as I was already home.  I had just discovered the thrills of old-time radio and now realized that the unnerving telephone message etched in my mind was nothing but an imitation—albeit a brilliant one—of the most memorable signature in American radio drama. Yes, those lines sure tolled a bell, even though the knell was delivered in a different voice and accompanied by the somber and to me as yet unfamiliar strain of Saint-Saens’s Le Rouet d’Omphale.

The alter ego of Lamont Cranston—’wealthy young man about town’ who used his mysterious ‘power to cloud men’s minds’ to aid the forces of law and order—The Shadow was a man of many voices. Since he always had to have the last laugh, his strained vocal chords seemed to require a number of replacements.  On this day, 26 September, in 1937, when The Shadow returned to the airwaves after a thirty-month-long hiatus, Cranston received another one of those vocal makeovers, this time courtesy of Orson Welles.

Welles has gotten rather too much credit for his portrayal of The Shadow; after all, he was neither the first actor to play the role nor the one who stuck with it the longest. He spoke condescendingly of the popular program—an attitude common among actors and writers who used radio as a career springboard or a temporary cash cow—and asserted that he read his part without rehearsals (an unlikely story, given the fastidiousness of the sponsors and Welles’s youthful inexperience). To be sure, Welles’s first disappearing act as The Shadow—in an episode titled “Death House Rescue”—was neither a dramatic nor a thespian marvel.

In a story about Cranston’s efforts to save the life of an alleged cop killer on death row, Welles comes across as pompous and disdainful; since he always sounded like none other than Orson Welles, overgrown ‘boy wonder,’ it is difficult to determine whether he was sneering in character or at his character—a ham hampered by an attitude of I’m-way-above-such-baloney.  Agnes Moorehead, who played opposite Welles, managed a less self-conscious performance as Cranston’s companion, the “lovely Margot Lane,” whatever trifle of a line she was being tossed. Unlike Welles, Moorehead inhabited her role rather than interrogating it, which made her a most valuable and much admired player in commercial radio drama.

Still, his pretensions notwithstanding, Welles’s subsequent fame served The Shadow quite well. It encouraged scholars to dig up transcriptions of the long-running series and contributed to their preservation, although surveys of Welles’s distinguished theatrical and cinematic repertoire generally devote little more than a few footnotes to these broadcast performances. Some scripts from the final months of the series (not preserved on tape) even resurfaced in print—as a 1970s high school textbook (pictured above).

As may have become apparent, I could never quite warm to Welles or wring chills from his impersonation of The Shadow. Then again, I always thought of The Shadow as the voice of a creep on the answering machine of a dislocated Scarlett O’Hara gone twilight. What an introduction!