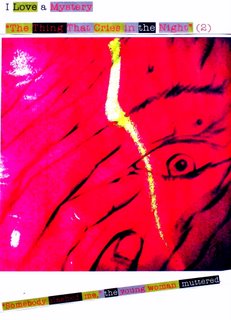 Twenty-four hours have elapsed since last I caught up with Jack, Doc, and Reggie. After leaving them at the airport, in front of that mysterious limousine, I took a little Halloween detour and screened Charlie Chan at the Opera (1936), starring Boris Karloff. It is a neatly spun yarn, recycling threads of the Gaston Laroux classic, tossing in references to Faust and Frankenstein, and boasting an operatic score by Oscar Levant. Like I Love a Mystery, the film borrows freely from its literary ancestors, rather than stealing from them. The difference is in the wink, the knowing smile it produces on the lips of an audience who will not only pardon the borrower but appreciate the sharing. Genre-defying yet enriched by his artistic influences, Morse understood well to be tongue-in-cheek without losing his bite. And there is plenty of bite in the second installment of “The Thing That Cries in the Night.”

The stalling is over (don’t you agree?) and things, however intangible, are developing rather rapidly. Jack, Doc, and Reggie find themselves in the mansion of a certain—or rather uncertain—Randolph Martin, a host who does not deign to greet them. The house, as Jack describes it, is “overflowing with the refinements and niceties of an old family,” with “signs of the family tree almost everywhere.” Before they can continue with their inspection and speculations, the three adventurers encounter a distraught young woman who appeals to them in a tremulous voice: “Look. Somebody slashed me.”

It is a voice of someone not quite there—of someone forlorn, longing, or haunted. It is an anemic voice, but the speaker’s blood is flowing freely. It is the voice of a victim, all right, but who is her attacker? The woman’s reply to this pragmatic question is as insubstantial as the volume of her speech; “they” did it, she whispers, and “they” are trying to kill her.

Having dressed her wounds, Jack observes that it is “apparent that the family tree is beginning to show signs of decay.” “Rotten clean down to the root,” Doc agrees. Might the Martin residence be another House of Usher? Is the “family tree” of “The Thing” chopped from the same wood as Poe’s Gothic?

The wounded one is Charity, one of three sisters living in the stately home of the elusive Randolph Martin: Faith (the “armful” in the limousine), Hope, and Charity. “Whoever heard of naming girls Faith, Hope, and Charity?” Doc protests, “Sounds like a Texas camp meeting.” What’s in a name? With little more than proper nouns to go by, the listener is invited to put the Martin clan to the test, to determine whether the names rightly adhere to their bearers like a Dickensian label or whether the three women are virtuous in name only.

Suddenly, the air is filled with the cries of an infant, followed by sounds of a body taking a tumble. The noise subsides. A voice, stern, elderly and female, demands to know what happened. Before the perplexed guests can utter her name, the woman introduces herself as Randolph Martin.  “And I need help, she adds, “I am having granddaughter trouble.”

What might be the trouble? Blood on the carpet and secrets underneath? Having already been fooled once by a name—a woman called Randolph—listeners are advised to approach the ladies of the house with some trepidation. It is an intriguing naming game that Morse plays with us; after all, in radio drama, there is little more concrete to be had than uttered sounds.

Without an omniscient narrator to guide us, without any tangible clues in sight, we are at the mercy of each speaker. Well, you might argue, reality is a baby crying—but should we believe our ears?

2 Replies to “Listening to “The Thing That Cries in the Night”; (Chapter Two): Charity Is a Wounded Stranger”