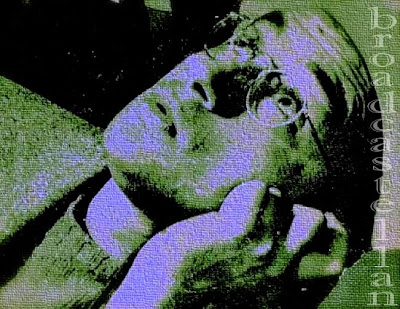 “How do you want it?” the stern-looking woman inquired. “In tens,” I said, because I needed it that way. She was a bank clerk behind a counter; and I was referring to the denomination in which a portion of my savings was to be returned to me. I sounded like a masochist saying it; but, stepping into the money market in tense times such as ours, you must really be a glutton for punishment. As someone who still counts his savings in tens, I am not among the afflicted. Still, what with that whiff of October 1929 in the air and Iceland at the center of an international incident, you’ve got to be in hysterics to be laughing all the way to the vault.

Could an economic bust be a boon for the sit-at-home, dim-the-lights medium of radio? Of all commercial enterprises catering to our need for news and entertainment, it was the wireless that experienced a boom during the Great Depression. Radio profited from the closing of Broadway shows and the demise of Vaudeville. And while programs on the air advertised plenty of products, they came to your home free of charge; unlike today’s cable and satellite receiver, the old cat’s whiskers did not require a subscription. Even the equipment could be assembled cheaply.

Be it Wall Street laying an egg or enemy planes dropping bombs, the poor cousin of television truly comes into its own when the world is in turmoil. To be topical, for once, I am listening to a few classic programs featuring assorted banking woes.

Jack Benny pinching a penny, safecrackers at work in an episode of Gang Busters, or hapless yokels like Lum and Abner offering financial services, radio gave the public an earful of what, for the most part, it didn’t have: money, and the trouble that comes it with, especially when it goes. Given the prudery of radio entertainment, it is probably safe to assert that misdeeds for dough outnumbered crimes of passion on the air, unless that passion exhausted itself in a peck on the cheek, however embellished it might get in your mind. Mr. Keen may not have been a Tracer of Lost Profits, but radio thrillers were nonetheless teeming with have-nots trying to get some without resorting to the legalized gambling known as the stock market.

“Please, would you come to the bank with me. Please,” a woman urges, with distress in her voice.

Another terrified investor? A demented clerk trying to get you to open an account? Well, wait and hear. It is the opening of a Lights Out! thriller cheekily titled “Come to the Bank” (17 November 1942). As playwright Arch Oboler explains, it is “the story of a woman who, for strange reasons soon apparent, is determined to get us to the bank.” These days, as empty bank vaults are about as spine-chilling a setting as a crowded morgue, the above plea makes for an intriguing premise indeed, especially if the concept of a presumably solid depository and a final resting place are being equated.

“Come to the Bank” is the account of a woman robbed of her savings as well as her sanity, insisting as she is that the missing man she cared for is “entombed” in the wall of the titular institution. “This is your last warning,” a psychiatrist tells her, “You are to stay away from the bank. You are to behave yourself as the good, intelligent citizen you normally are.” If he were alive today, shrewd Mr. O would milk his scenario for all it is worth.