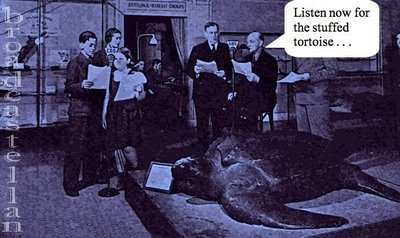 “Ladies and gentlemen. We take you now to New York City for the annual tree lighting ceremony: Click.” Imagine the thrill of being presented with such a spectacle . . . on the radio. You might as well go fondle a rainbow or listen to a bar of chocolate. Even if it could be done, you know that you have not come to your senses in a way that gets you the sensation to be had. I pretty much had the same response when I read that BBC Radio 4 was going to air a documentary on the Three Stooges. According to the current issue of the Radio Times “The Three Stooges: Movie Maniacs” (available online until 10 December) promises a “detailed overview” of the career of the comedy trio and its six (that’s right, six) members (not counting Emil Sitka). That there were six Stooges is about the only revelation of this half-hour program, other than that attempting an audio documentary on this most visual of slapstick comics is about as dumb (not not early as funny) as anything the Three Stooges might be seen doing, if only they were to be seen.

There is a lot the radio can do better than television or the movies; but bringing home the appeal of physical comedy is not one of them. Matters are not helped by historian Glenn Mitchell, who delivers what Radio Times‘s David Crawford calls a “rather dry analysis” in a flat, humorless voice that makes you reach for a jug of water or, alternatively, for the proverbial off button of whatever device you use to tune in these days. Pratfalls never sounded this dull.

“Their wild knockabout and lunatic spirit continued to endear [the Three Stooges] to fans worldwide,” Mitchell tells us, “albeit less so in Britain.” Why? “It may be that British tastes run less to the direct brand of slapstick that was their stock in trade,” Mitchell suggests, only to point out that “they were enormously popular” in Britain during the 1930s and ‘40s. This “lack of familiarity” Mitchell attributes to the fact that the Stooges were rarely seen in Britain thereafter, whereas they have been television stalwarts in the US since the late 1950s. Obviously, those guys have to be seen to be appreciated. Heck, they have to be seen to be loathed.

Comparative obscurity aside, their disappearance from British screens seems to have translated into a lack of funding for a television documentary that might have contributed to a reappraisal of their work. Without visuals, you end up with explanatory—and rhetorically slipshod—notes like this one:

It must be said that the Stooges films maintain a constant stream of slapping, eye-poking, and bashes over the head that some people find relentless to the point of irresponsibility.

While clearly out of its element on the airwaves, “The Three Stooges: Movie Maniacs” is not an out-and-out dud. Tracing the comedians’ career from their vaudeville beginnings to their work in pictures, big and small, the lecture is enlivened by numerous sound bites from films and television interviews. Among the voices you’ll hear are those of Moe Howard, Larry Fine, Joe Besser, Curly Joe DeRita, and Lucille Ball.

For all its swift editing, the program still leaves you with that “you had to be there” feeling, the shrug that might have been a chuckle; and to take you there via radio takes consummate professionals like Edward R. Murrow or Ted Husing, or a Herbert “Oh, the humanity” Morrison describing the Hindenburg go down in flames. This one simply deflates before your very ears.