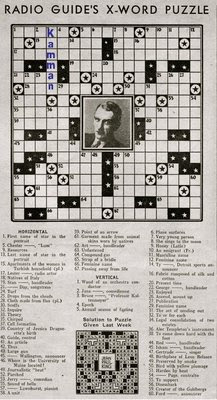 K A M M A N. I am sure a lot of readers of Radio Guide magazine would have found “Bruce ___, ‘Professor Kaltenmeyer’ as easy a crossword puzzle clue as “Jane ___, comedienne” or “___ Wallington, announcer.” From 1932 onwards, Bruce Kamman played the good-natured and much put upon teacher of the gang at Kaltenmeyer’s Kindergarten, a weekly comedy program that originiated from WMAQ, Chicago. Kaltenmeyer’s is one of those popular programs that have all but disappeared into thin air, the exception being the 12 December 1936 broadcast (which you may access on Jerry Haendiges’s invaluable “Same Time, Same Station” site). Reminiscent of and anticipating German schoolboy comedies like Heinrich Spoerl’s Feuerzangenbowle or Erich Kästner’s Das Fliegende Klassenzimmer (both 1933), Kaltenmeyer is a winsome trifle of a show. Each week, the Kindergarten opened with the catchy signature “Just for Fun”:

Kaltenmeyer’s starting,
Let’s all go to school.
In this kindergarten,
Where nonsense is the rule.

Indeed, much of it is nonsense, some of it song. Fibber McGee and Molly team Jim and Marian Jordan were featured on the program; until the fall of 1936, they were among the Professor’s international crowd of poopils. The 12 December 1936 broadcast (an excerpt of which was later rebroadcast on Recollections at Thirty) includes the somewhat incongruously wistful “Sweetheart, Let’s Grow Old Together” and offers at least one memorable pun involving the definition of the word “indisputable,” which one Kaltenmeyer’s rambunctious kids (adults all) manages to put into the following sentence: “Indisputable weather we’re having.”

It is Bruce Kamman’s voice, though, that adds “indisputable” charm to the nonsense. It is the kind of Sig Ruman-Frank Reichert voice—warm, avuncular, and too Jean Hersholt to be altogether ridiculously, let alone threateningly Teutonic. According to Francis M. Nevins’s The Sound of Detection, the Cincinnati-born Kamman, who entered radio as early as 1920, would continue his broadcasting career off mike, namely by producing and directing episodes of the Ellery Queen mystery-cum-celebrity quiz program.

Kamman’s days as Kaltenmeyer came to an end once the Germans began to wage war in Europe. In 1940, well before the United States entered the Second World War, Kaltenmeyer stopped saying “Auf Wiedersehen.” The character was removed from the Kindergarten, and what was left of the show folded soon thereafter.

I guess, when you make a career of sounding like Sig Ruman, you were expected to start shouting “Sieg Heil!” or hiss sinisterly and subsequently expire, rather than be permitted to send kindly greetings like “Bleiben Sie wohl und halten Sie sich munter” (“stay well and cheerful”) to the American people, whatever their heritage or dialect. Clearly “good old days” recalled in the theme song were over.

Now, let’s all go to back to the school that was radio and solve the puzzle . . .