When I read that Boys Town dropout Mickey Rooney was to appear once again on the British stage, I resolved to adjust our vacation schedule accordingly and ring in the new year in Bristol, England. Why not cheer on the late-octogenarian trouper as he performs his way into the Guinness Book of Records, I thought. Rooney, who has been on the boards and in the studios for nine decades, can currently be seen as Baron Hardup in the pantomime Cinderella at Bristol’s old Hippodrome. Granted, I was not exactly panting for panto, unaccustomed as I am to that most British of holiday theatricals. The first one I caught, back in 2005, boasted Ian McKellen . . . in drag. It felt as if I had crashed a fancy dress party, with everyone around me too inebriated to permit me to catch up or on. The experience left me more bewildered than tickled. I failed to find amusement in such consummate waste of thespian talent on what struck me as a vulgar, charmless production of Aladdin at the Old Vic in London. I did not understand that vulgarity is the very charm of British panto—an outrageous spectacle befitting the topsy-turvitudinous twelve-nightly revels.

This time around, having just had my fill of Pulitzer Prize-winning drama (August: Osage Country), opera (Hansel and Gretel), and musicals (The Sound of Music and Carousel) in London, I was ready for something decidedly more lowbrow. Besides, the Hippodrome’s presentation of Cinderella presented us with the opportunity to meet up with friends, among them Michelle Collins (aforementioned), who was cast as the Wicked Stepmother.

We ended up spending quite some time backstage, then dined and partied with cast members after Mickey had slipped out of the theater. The superannuated Andy Hardy made it clear that he was not to be approached for signatures or photo opportunities; nor was he to be seen anywhere but onstage, not given to mingling with his British co-stars whose names can mean nothing to a Hollywood legend.

His exclusivity is a wise precaution, no doubt. Who, at his or any age, would relish the prospect of being badgered after a night’s work while stepping into the icy dark of a backdoor alley, being coughed and sneezed at by the occupational hazards that are autograph hunters, some of whom, if they had just come out of the show, were still somewhat musty after being shot at, as was my misfortune, with a giant water pistol fired by comedian Bobby Davro? Indeed, it was rather sporting of the hardy one to fulfill his contractual obligations, being that his eighth wife, Jan, who was slated to join him as the Fairy Godmother, had taken ill.

So, how was Mr. Rooney, you ask? Well, he was . . . there, or very nearly so. It appeared that only few members of the audience particularly cared. I doubt that many were quite aware just who this old fellow was. A couple seated in front of us, pointing at the oversized keepsake playbill, shook their heads at the sight of his picture, whereas the photograph of Ms. Collins triggered nods of recognition. It’s a long way from 1930s Hollywood to 21st-century Bristol, you know.

You might think that, with a name like Joe Yule, the man who made a name for himself as Mickey Rooney was born to spread Christmas cheer. Instead, as if finding himself on stage quite by accident, the distant star twinkled beyond the reach or ken of a high-spirited crowd eager to laugh at Buttons (Davro), hiss the Wicked Stepmother (Collins), or cheer the juveniles—that is to say, interact with the characters in traditional panto fashion. To the children, the action-slowing walk-ons of Rooney’s kindly grandfather figure must have been either inconsequential or else incomprehensible, lost within the noisy glare of the spectacle. Still, there he was, aware, no doubt, that showcases such as the pantomine are about the only opportunity left to an actor of his years to make what is little more than a stage cameo.

For all the fun of Cinderella (and jolly good fun it certainly was), there was something pathetic about yesterday’s Huck Finn being benched on the sidelines, looking on benevolently if slightly bewildered. Mr. Rooney, who had two short musical numbers, including a wistful rendition of “Smile,” spent most of his time seated to the left of the stage while nominally assuming its center. The tunes suited him, but were incongruous all the same with a production that relied heavily on contemporary pop music as if out to turn the fairy tale favorite into High Jinks Musical. 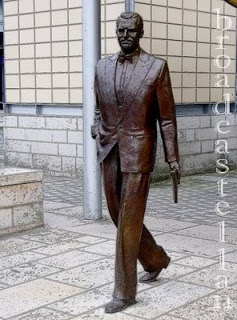 Not far from the Hippodrome, on the vast emptiness that is Millennium Square, there stands a forlorn statue of Bristol’s native son Cary Grant, unheeded by tourists (of which there were few) and locals (who may well shun the space) alike. Still, there it is, clutching the script for To Catch a Thief as if determined to catch the next flight back to California. Like small-statured Rooney, his stage presence and its reception, the statue brought to mind the quest (the questionable) upon which I had embarked when, feeling displaced and unsure of myself, I commenced this journal back in 2005: to keep up with the out-of-date as if rehearsing my exit in a state of conspicuous invisibility. Yet, here I am, forever behind . . . like a pantomime horse’s ass.