“Today, the real humorist is fast disappearing.” The “Today” here is 30 January 1949. The voice is that of satirist Fred Allen, who made the claim when called upon to expound on “The State of American Humor” for the benefit of folks tuning in to NBC’s Living 1949. “Yessir,” Allen declared, “the average comedian is a mouth that speaks the thoughts of others’ brains. Machine age humor, like the automobile, is turned out on the assembly line.” As a wordsmith who preferred to live by his own wit, Allen was the free spirit in a machine that increasingly generated shoddily assembled audience participation programs, the temporary demand for which ran him out of business that year—a dead giveaway that executives were not in it for laughs.

What Allen in his dread of the mechanical and the mercenary could not foresee is that, sixty years on, the “[m]achine age” would give those determined to publish the thoughts of their own brains an instrument with which to bypass the assembly lines and make a beeline for the byline that would otherwise be hard to come by; a forum in which freely to exchange ideas instead of turning out commercial copy in exchange for a few pay-per-click pennies; and a means of reaching out to the “real” among the virtual whose minds are not of the assembly line persuasion.

One way of acknowledging such commercial-free souls and inspiriting kindred is to bestow the Dardos. It might sound like some post-apocalyptic cult; but in truth it is a token

given for recognition of cultural, ethical, literary, and personal values transmitted in the form of creative and original writing. These stamps were created with the intention of promoting fraternization between bloggers, a way of showing affection and gratitude for work that adds value to the Web. 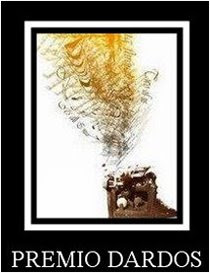 I am certainly grateful to the two journalists who saw it fit to stamp me thus. After all, Ivan (Thrilling Days of Yesteryear) and Jeff (The Easy Ace) are among the few who share my enthusiasm for broadcast history and historic broadcasts—the kind of kilorecycling that has been going on here for nearly nigh on four years. In felicitous low-fidelity, they are committed, as I am, to re-popularizing the post-popular, to tracing the mainstream that has dried up or run its course into a sea of indifference. Their work “adds value to the Web” all right; but that is rather too prosaic a way of putting it—and, as far as my web experience is concerned, an understatement besides.

Thrilling is what Inner Sanctum’s Lipton Tea lady might have termed “brisk” entertainment. It is entirely without additives or artificial sweeteners, which makes taking refreshment there a guiltless pleasure. Ace, meanwhile, tells it “The Way It Was”; in his matchless on-this-day approach to chronicling “yesteryear,” he easily aces out a less organized mind like mine, which promptly lapsed into a more idiosyncratic mode of relating the past. To relate to them both has been at once “Easy” and “Thrilling.”

The same can be said for the task at hand. In keeping with the “rules,” I

1) accept the Dardos by displaying it here, along with the names of those who bestowed it and a link to their respective journals; and

2) pass it on to another five blogs I deem worthy of this acknowledgement, contacting each of them to let them know they have been selected.

The five journals I single out here have kept this niche in cyberspace from feeling like a padded cell or isolation ward to me. They are all eligible for the “Helen Trent” award, far from mute testament that because a blogger is “thirty-five or more,” an active life online “need not be over,” that blogging “can begin at 35.” The Dardos I bestow upon them because I appreciate their wit, their ebullience and their tenacity; because they do as they please and, by doing so, make me say, “please, keep doing it.”

As Emerson put it, the
perception of the comic is a tie of sympathy with other men, a pledge of sanity, and a protection from those perverse tendencies and gloomy insanities in which fine intellects sometimes lose themselves.

A fine intellect not in danger of gloomy insanities is Doug, who keeps Waking Ambrose. Ambrose Bierce, that is, whose Devil’s Dictionary he translates and updates for the 21st century. What’s more, Doug invites all of us to do the same, and, having acknowledged our contributions, regales us with stories and verse, then finds time to make the rounds and drop us a taut line. In all this interactivity, he is a paragon among bloggers.

There are journalist on the web with whom I keep having imaginary conversations. With Elizabeth of Relative Esoterica, whom I picture as a Myrna Loy unencumbered by a William Powell, I discourse on film noir and biography as we listen to the jazz about which she is not only knowledgeable but passionate. We agree that, while it is unwise to be fanatic about anything, it would be wretched not to feel enthusiastic about something or other.

With Clifton of Canary Feathers I converse about the radio programs that enriched his childhood—be it One Man’s Family or Kaltenmeyer’s Kindergarten–and years in broadcasting as he plays an old but beautifully restored church organ surrounded by cats who flit in and out of a scene brightly lit by . . . a leg lamp. In my daydreams, I can readily dismiss the fact that felines make me sneeze.

With fellow expatriate Fred, he of The Synchronicity of Indeterminacy, I go on about Quiet, Please and the Columbia Workshop as he persuades me to open my mind and ear to contemporary sound artists and aural storytellers. His own stories are a popular and critical success. He might be fascinated by automatons—but is living proof of that the imaginative thinker need not fear extinction. His journal(s) would have put his aforementioned namesake at ease.

With John, the “urbane pagan” of Enchanté, I have had many a conversation; I see him whenever I am back in New York City. A few years ago, he expressed to me his intention of starting a web journal. He finally got underway, and what a way he’s got, casting imaginary musicals—On the Fritz! (“A sparkling new musical about Prussia’s gayest prince [and greatest king]”—or musing about the state of his follicles.

With all of them I feel a certain “tie of sympathy.” That those ties are machine-knit does not make them synthetic. Otherwise, I would hardly be one-hundred percent woolgathering about them . . .

8 Replies to “That “tie of sympathy”; or, Five for the Dardos”