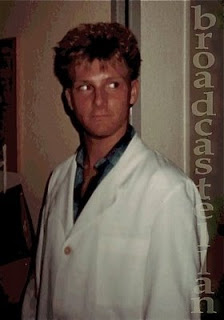 Like many a woebegone youth of my generation—once known as the No Future generation—I entered the crumbling empire of Evelyn Waugh’s fictions by way of that lush, languid serial adaptation of Brideshead Revisited. It wasn’t so much what I saw as what I had missed that made me pick up the book. Owing to my mother’s loyalty to Dynasty, which aired opposite Brideshead on West German television back in the early 1980s, I was obliged to fill whatever holes our weekly appointment with the Carringtons had blasted into Waugh’s plot. Even more circuitous was my subsequent introduction to A Handful of Dust. In keeping with the title—and in poor housekeeping besides—a tatty paperback of it had been cast to steady a wonky table in the community room of a nurse’s residence at the hospital where I carried out such duties as were imposed on me during the mandatory twenty-month stretch of civil service any boy not inclined to be trained for military action was expected to fulfill.

For twenty months, I, who ought to have been eating strawberries with Charles Ryder, served canteen slop and sanitized bedpans at a Cologne hospital. Was there ever a locality less deserving of the name it gave to the art of concealing our stenches, of which Romantic poet Samuel Taylor Coleridge once “counted two and seventy” in Cologne alone? My head was not held very high during those days, which probably led me to investigate just what propped up that misshapen piece of furniture. For once, though, I had reason to lament being downcast. A Handful of Dust turned out to be a rare find.

Counting the weeks to my release, I could sympathized with its anti-hero, the hapless Tony Last, trapped as he was in the wilds of the Amazon, forced to read the works of Charles Dickens to the one man who could have returned him to civilization but, enjoying his literary escapes, refused to release him—a scenario familiar to regular listeners of thriller anthologies Suspense and Escape.) Like Mr. Last, I had gotten myself in an awful fix—and up a creek that smelled the part.

So, when I think of Evelyn Waugh’s early fictions now, at a time in my life when I can more closely associate with his later Ordeal of Gilbert Pinfold, what comes to mind is the comparative misery of my youth and the pleasures derived from the incongruities at the heart of his late-1920s and 1930s novels, satires like Decline and Fall (1928), Vile Bodies (1930), and Black Mischief (1932). While not inclined to relive those days by revisiting such titles, I could not turn down the chance of another Scoop (1937), the first installment of a two-part adaptation of which is being presented this week by BBC Radio 4.

Ever topical, Scoop is a satire on journalism, war and the money to be made in the Hearstian enterprise of making the news that sells. Finding himself in the midst of it all is William Boot, whose sole contribution to the field of journalism is a “bi-weekly half-column devoted to Nature.” Decidedly not mightier than the sword, his pen produced lines like “Feather-footed through the plashy fen passes the questing vole. . . .” Not the rugged, muscular prose you’d expect from a war correspondent.

It was all a deuced mistake, of course, this business of sending Boot to report on the crisis in Ishmaelia, a “hitherto happy commonwealth” whose Westernized natives no longer “publicly eat human flesh, uncooked, in Lent, without special and costly dispensation from their bishop.” The chap who was meant and eager to go among them was William’s namesake, one John Courteney Boot, a fashionable novelist who “kept his name sweet in intellectual circles with unprofitable but modish works on history and travel,” works like “Waste of Time, a studiously modest description of some harrowing months among the Patagonian Indians.”

Absurd situations and wicked caricatures aside, it is Waugh’s prose—the pith of impish phrases like “studiously modest”—that makes a novel like Scoop such a font of literary Schadenfreude. “Amusingly unkind,” the London Times Literary Supplement called it. As it turns out, the joke’s on us once the narration is removed.

Condensing the wild plot in suitably madcap speed, Jeremy Front’s radio adaptation retains little of the narration, sacrificing not only wit but clarity to boot. What is left of the Waugh’s exposition may well lead the listener to believe that John, not William, is the central character. Indeed, like Waugh’s dimwitted Lord Copper, head of the Megalopolitan Newpaper Corporation, listeners are apt to (con)fuse the two.

Unlike Front, Waugh takes great pains to set up the farcical plot, dropping first one Boot, then another, and makes it clear just how the unequal pair are matched:

“The fashionable John Courtney Boot was a remote cousin [of William],” Waugh’s narrator informs us, but they “had never met.” Too eager to get on with the story, Front omits these line, relying solely on the juxtaposition of the two characters, who, during those first few minutes of the play, are little more than names to us.

However bootless the lament, I wish those stepping into the wooden O of radio today would put themselves in the shoes of their listener. Before experimenting with fancy footwork, they should consult a few classics to arrive at the proper balance between dialogue and narration. Otherwise, a potential Scoop can seem like such a Waste of Time—especially to those whose concentration is impaired by plot-obstructive reminiscences . . .

2 Replies to “Re: Boot (A Mental Effort Involving Distant Cousins)”