Let’s start by setting forth
That it is good to take a swig of fancy every now and then,
A nip or two of wonderment,
To jag the mind.

It’s good to send your thoughts excursioning
Beyond the paved and well-worn alleys of your life
If only as a form of exercise [. . .] 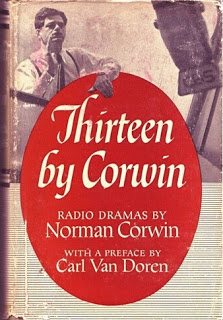 The man who prescribed this “form of exercise” in “Seems Radio Is Here to Stay” some seventy years ago, back in April 1939, is producer-director-writer Norman Corwin. Today, he turns 99. Radio’s foremost playwright was forced, however, to take the exercise outside the medium he loved. By the late-1940s, there was no room in US radio for “excursioning,” and a frustrated Corwin advised anyone who wanted to “make a living from radio” to be “mediocre.” The “writer who wants to do the best work in his power, in defiance of formula, I say: Forget radio.”

Corwin insisted that he was writing “neither with cynicism, anger, nor contempt.”

My only emotion is that of sadness for an old friend, now bedridden, who has been kind and generous to many writers, including me. The disease is probably incurable. Radio may well die, as a cultural force, of the after-effects of the childbirth of television. The complications are greed, venality and social irresponsibilities. Its spawn, the half-breed that is neither pictures nor radio but both, is already devouring everything around it, an omniphage chomping steadily into the economy of books, sports, movies and radio itself.

No, Corwin was not about to defect, like radio’s talent, sponsors and audiences, to the rivaling medium of television. Unless its producers were ready to “apply as much money and time to serious experimentation on the level of the old Columbia Workshop,” he would “continue to be more interested in radio, films, and print.” To a dramatist concerned with the play of ideas, television had “neither the full scope and mobility of cinema, the immediacy of the legitimate theatre, nor the powerful suggestibility of radio’s unillustrated spoken word.”

It is of this “suggestibility” that the body of Norman Corwin’s work remains one of the most persuasive illustrations.

One Reply to “Seems Mr. Corwin Is Here to Stay”