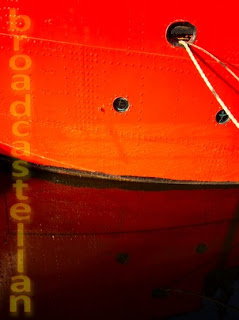 This is not going to be one of those “the dog ate my homework” sort of posts, which are as much an excuse for not writing as they are a woeful excuse for writing anything at all. Besides, I could hardly blame Montague, our terrier, for keeping me from keeping my journal. Rather, it is the home work that has done the biting, gnawing and tearing at the hours I would otherwise earmark for sinking my incisors into stale pop-tarts—you know, those cultural marginalia with which I am wont to occupy my mind.

While I have rarely been all at sea when it comes to the leisurely pursuit of gathering and examining pop-cultural jetsam, my mind does not take to creative recycling when my limbs are aching after having performed some burdensome chore; and these past three months, my limbs have had quite a workout. We have been readying our late-Victorian house in the Welsh seaside town of Aberystwyth for its present trio of occupants, only the four-legged one of whom appears to be as blithe and sprightly as of old, albeit saltier.

We have moved in at last; and even though much remains to be done to make and keep the place shipshape, especially now that the house guests are checking in and up on our work, the sofas and easy chairs are in place from which to let out a defiant “Later!” and take off instead in further explorations of the airwaves or some such neglected channel.

The waves! Even though you would have to climb to the top floor of our house to get a glimpse of the bay, the surf and the seagulls are very much part of the enveloping soundscape. I suspect that the sights and sounds of the sea are going to feature prominently in subsequent—and decidedly more frequent—entries. It was not quite so easy for me to work the business of scraping wallpaper into my reflections; but the sea is another kettle of fish altogether.

So, “Good evening Mr. and Mrs. America, from border to border and coast to coast and all the ships at sea,” as famed newscaster and lexicon-artist Walter Winchell used to say—and which greeting I extend to Mr., Mrs., and Ms. Internet surfer the world over—“Let’s go to press . . .”

Related writings (featuring Walter Winchell or an Impersonator)
“Being But Blogmad North-Northwest”
“Amelia Earhart Is Late”
“Old-time Radio Primer: B Stands for broadcastellan”