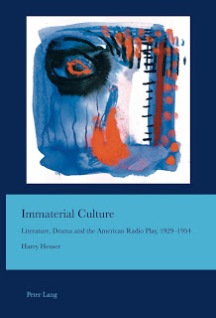 My study Immaterial Culture: Literature, Drama and the American Radio Play, 1929-1954 has just been published.  So, as well as explaining the subject matter of the book and the objectives of its writer, I decided to devote a few journal entries to the story behind its production, to its birth and life in relation to my own journey.  There is also the small matter of its afterlife, a matter to which no parent, proud or otherwise, can be entirely indifferent.
Along with my other recent publications and current projects, of which I have said nothing in this journal, Immaterial Culture has long kept me from materializing here.  No doubt, I could have made more effective use of broadcastellan as a promotional vehicle.  And yet, writing, like listening to radio plays, is a solitary experience; at least it is so for me.
Like the performers behind the microphone, writers are generally removed from the audience for whom their performance is presumably intended, an audience that often seems so abstract as to be no more than a construct.  The writer, script reader and listener may be sitting in a crowded room, and that crowd may well matter; but what matters more is the immateriality of the words once they are read or spoken.  Words that create images or match stored ones.  Words that evoke and awake feelings, stimulate thought.  Words that, uttered though they are to the multitude, begin to matter personally and take on a multitude of new lives.
That Immaterial Culture is a profoundly personal book will not be readily apparent to anyone reading it.  After all, I have refrained from using the first person singular to refer to myself as the reader or interpreter of the plays I discuss.  I thought I’d leave the privilege to say “I” to that “obedient servant” of the Mercury Theatre, the orotund Orson Welles.  Instead, I decided to disappear and let the play scripts and productions I audition take center stage, a prominent position they are often denied.  Talking about old radio plays as if they have no presence, as if they are chiefly of interest to the (broadcast) historian, only makes matters worse.
Immaterial Culture, then, is an invitation to listen along, an invitation to talk about American radio plays of the past as one still discusses the material culture of books, motion pictures, theater, and television programs …