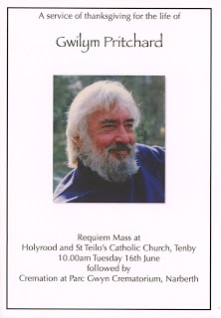 “I haven’t kept any diaries as such, apart from the odd word or two in my sketch books.  I have never felt the need to write anything and I really cannot see the point why anyone would be interested in what I would have to say.”  This is what the painter Gwilym Prichard wrote to me in reply to some questions I had while I was working on a monograph on his life and art.  Knowing Gwilym, I also knew that, though he was a man of his word, one word might have to suffice even when I, as a would-be biographer, was hoping for a thousand.

Gwilym talked – and continues to talk – to us through his art; he also talked to his art and had, he told me, private conversations with the works as they came into being on the canvas.  He didn’t think much of critics or the need for interpretation.  He believed that an artist’s work should speak for itself.  Terse as his words to me might sound, they were uttered in humility rather than indignation.  “I am grateful,” he added in parenthesis, “that I have had some success with my painting – I really have very little confidence but what I produce or show is stuff that I have painted with love and sincerity.  I hope that this comes through.”  That love – and the success it brought – was easily documented, mostly through Gwilym’s paintings.

“Any more questions?” Gwilym continued his notes, which, much to my surprise, amounted to over thirty handwritten pages.  Clearly, he did not mean to cut me off, and wished me and my partner, Robert Meyrick, “all the best with the writing” with which he had entrusted us.  He answered every question, right down to the matter of the “t,” the letter he dropped from his surname in midlife whenever he signed his art.

That “writing,” A Lifetime’s Gazing, was a very special assignment for me.  Through Bob, I met Gwilym and his artist wife, Claudia Williams not long after I had moved to Wales in November 2004.  Back then, I felt distanced from Wales and the Welsh; I found it difficult to find myself or to find any purpose for myself here.  In fact, I still struggle with that.  I did not know then that I would end up working on Gwilym’s monograph.  Though it began years later, the project offered me an opportunity to write about the culture that I, a German with a New York education, could never presume to call my own.

I could relate to Gwilym in his difficulties of expressing himself fully – I mean truthfully and meaningfully – in English, Welsh being his first language, the language of his childhood.  Welsh spoke to him differently.  “I am a Welsh painter because I am Welsh,” he wrote, refusing to make an issue of what he felt to be at the core of his being … something understood.

Gwilym described himself as “emotional,” and English was perhaps too much the language of adulthood or reason, too abstract for an artist who treasured the concrete – the rock, the sea, and the soil.  The concrete had weight and depth for him, a weight and depth he did not have to measure because he felt it as an immeasurably rich presence, a constant in a life full of change and challenge.

How fortunate Gwilym was to have developed such a language; and how lucky we are to be hearing him with our own eyes whenever we look at the works that chart his journey …