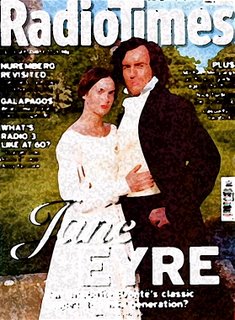 Well, I could blame it on the medication. Or it might be this holiday souvenir of a cold that is dulling my senses. I sure haven’t been able to savor my meals lately. So why should I thrill to yet another warmed over helping of Jane Eyre, a story I have read, written about, and taught, that I have heard and seen more often than any other work of English fiction? Why should anyone get excited about such a much chewed on and oft-reconstituted chestnut? Save college students, perhaps, who may take the BBC’s new television production as an occasion to keep their assigned editions unopened and to watch the plot unravel in four readily digested hour-long installments. If I sound cantankerous, it is neither bronchitis nor Ms. Brontë, I assure you: it is Sandy Welch’s bland rehash of one of the most daring and delicious growing-up stories ever concocted.
So, what’s wrong with this version, apart from production values and camera work reminiscent of 1970s television, apart from plain Jane’s sculptured eyebrows (brought to the job by Rossetti-lipped Ruth Wilson) and swarthy Rochester’s Darcyish looks (courtesy of Toby Stephens), apart from its skimming of some ten chapters (or eight years) and the half-hearted rendering of the novel’s relished if easily overcooked gothic mystery? Perhaps I had expected something rather more dynamic and radical after last year’s sensational adaptation of Bleak House. Jane Eyre, to be sure, is not a Dickensian novel. It does not depend on bathos and caricature to elicit our responses; it relies instead—and succeeds in relying—on the intimacy of its portrait, the self-portrait of an inexperienced, self-conscious young woman who is given a voice to tell her tale.
That was radical in 1847—and it is still remarkable today, despite millions of blogs reveling in or bogged down by the mundane. Indeed, readers of Brontë’s pseudonymously published tale wondered whether this was fiction at all, or whether it was, perhaps, a thinly veiled if highly romanticized version of a real governess (in the employ of Mr. Thackeray, perhaps?). They wondered, too, whether this story was penned by a woman, considering its frank account of a socially unequal and as such questionable relationship.
Adaptations of Jane Eyre—any reworking worth our while—should make an effort to recreate this sense of realism, which is not found in the novel’s gothic situations, in the screaming but otherwise voiceless character of the presumably mad, Sargasso Sea-swept Bertha, in the fire that consumes Thornfield Hall and temporarily blinds its owner, or in the telepathic connection that reunites a mature Jane with her now helpless and emasculated master. The realism lies in the first-person narration, in the observations of a woman who has the nerve to tell her story, a story of teenage angst filled with humiliation, unease, and doubt. In short, a real story.
Voice-over narration, so closely associated with film noir, assists viewers to reach where the novel invites us to go: under the surface of conventions, beyond appearances, and as straight as Victorians could possibly permit themselves to pry into the heart and mind of a woman whose story is taken from her once she is not permitted to tell it herself.
Even radio, the medium best suited for the exploration of Jane’s mind, often resorted to an omniscient narrator such as this one by Walter Hackett, as performed in the US by the Yankee Players and broadcast in the early 1950s over the Yankee-Mutual Network:

The courtyard of the King George at Millcote is deserted with but the exception of the young girl standing at the entrance. She shivers as the rawness of the late November afternoon strikes through her thin cloak. Suddenly the door of the inn opens and a large-boned, powerfully-built, sullen-featured woman walks across the cobblestones toward the young girl.

It is time to return the story to that “young girl”—or leave it with Charlotte Brontë, who tells it so well. So, would-be dramatists of radio, film and television, take heed: let Jane Eyre speak up, or shut up!