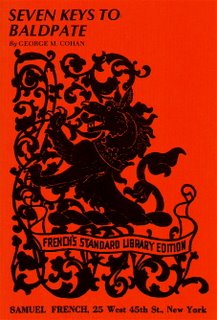 Well, I am rather less prickly than yesterday. My cold seems to be on its way out and, having spent some time out of doors in the warmth of the autumn sun, I feel somewhat more serene and benevolent. Speaking of doors (a transition more creaky than the farce I am going to write about today): Having complained previously (and elsewhere) about the conventional and therefore superfluous adaptation of Jane Eyre now flickering in weekly installments on British television, I am going to mark the anniversary of a decidedly more inspired variation on what was once a similarly familiar work of fiction, Seven Keys to Baldpate, a crowd-pleaser that was revived for radio on this day, 26 September, in 1938.

Granted, it is easier to rework a piece that does not warrant the reverence befitting a literary classic such as Jane Eyre, a respect that can be artistically stifling when it comes to revisiting or revising what seems to demand fidelity rather than felicitous tinkering. A mystery novel conceived by Earl Derr Biggers (creator of Charlie Chan), Seven Keys opened many more doors after going through the smithy of theater legend George M. Cohan. Unlike Biggers, Mr. Cohan did not play it straight, but turned the thriller into what he then sold as a “Mysterious Melodramatic Farce”—starring himself.

In Cohan’s farce, the thriller writer Bill Magee accepts the $5000 challenge of a friend who dares him to pen a novel within twenty-four hours. To achieve this, the author is being given what he believes to be peace and quiet—the only key to a remote resort shut down for the winter. During his night at Baldpate Inn, the supposedly single guest is disturbed by an assortment of singular strangers, lunatics and villains, until his friend shows up to confess that the bizarre goings-on were a practical joke designed to illustrate the ridiculousness of the author’s improbable plots. The epilogue of Seven Keys discloses, however, that the action of the play was a dramatization of the novel Magee actually managed to complete that night. He won the wager by fictionalizing the challenge.

Opening on 22 September in 1913, the play became an immediate and oft-restaged favorite with American theatregoers. It was subsequently adapted for screen and radio. When, some twenty-five years after its premiere, the producers of the Cecil B. DeMille hosted Lux Radio Theatre got their hands on this potboiler, they slyly revamped it as a commercial property fit for the latest medium of dramatic expression.

In his introductory remarks, DeMille promises the listener a “special treatment” of the play—and that, for once, was no overstatement. As I have discussed at length in Etherized, my study on old-time radio, the broadcast revision is not so much a rehash as it is an media-savvy update of the original.

Whereas Cohan’s version celebrates the victory of popular entertainment, of readily digested pulp fictions churned out for a quick buck, Lux writer-adaptor George Wells transforms Seven Keys into a radio story—a story about radio that parodies the anxiety of former vaudevillians-turned-broadcast artists to achieve lasting success, to be remembered long after the shows in which they starred week after week had gone off the air—to become cultural icons despite their invisibility. And those keys to uncertainty were handed to the man who had been through it all and stayed on top by knocking himself down, fall guy comedian Jack Benny.

Instead of a successful novelist, the artist now up for a crazy night at Baldpate is Jack Benny, as “himself,” a frustrated thespian who accepts the challenge of developing a suitable dramatic vehicle for himself after having been turned down for serious dramatic parts time and again. Benny’s challenger is no other than Mr. DeMille, who, in a rare stunt, not only introduces and narrates the play, but acts in it, and that without having to drop his director-producer persona. Throw in a few Lux Flakes and it comes out a clever bit of promotion all round.

The unpretentious yet self-conscious reworking of a play as old hat as Baldpate into a comment on the recycling business of radio entertainment—and a demonstration of how to lather, rinse, and repeat successfully—is one of Lux‘s most ingenious and engaging productions.