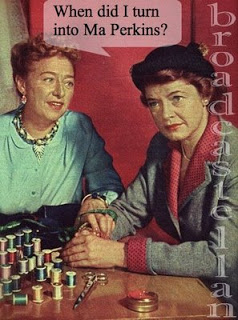 “Poor Old Helen Trent,” a fellow webjournalist exclaimed the other day. It is right and proper to join in this lament; not only was she single, middle-aged, and beset by troubles into which she was drawn each quarter hour to tease but never quite satisfy those members of the radio audience who had the morbid curiosity that is a requisite for serial listening. She now has very little to show for all those years of turmoil. While still recalled by many who used to follow her getting nowhere fast, she is very nearly silenced today, with only a few chapters of the long-running serial readily available to anyone desirous to catch up. Even worse is the fate of Stella Dallas (pictured), who does not get a single mention in Robert C. Allen’s Speaking of Soap Operas (1985), one of the books I consulted for the occasion.

When I began to research American radio drama and narrative (there is something dissatisfying to me in the term “radio drama,” considering the importance of the narrator in most of these fictions), I wondered whether I would ever get to hear the programs I had hoped to write about. In my recovery efforts, I went so far as to dig up MA theses and dissertations written during the 1930s, ‘40s, and ‘50s, if only to marvel at the material accessible to a student tuning in back then. Sure, I could have asked some of the old ladies whose Manhattan apartments I was cleaning back then; but, my memory being less than elephantine, I have come to distrust the recollections of others and much rather consult contemporary sources. One such is “The Radio Serial,” an unpublished thesis by Stanley Robert Rowe, who received his MS in 1949 from Boston University. As Rowe puts it, his “treatise is based upon six weeks of regular listening in July and August 1948 to all the dramatic serials offered by the two radio networks which broadcast them [i.e. NBC and CBS].”

Can you imagine? Six weeks with Stella Dallas, Helen Trent, and Ma Perkins! These days, one has to make due with isolated chapters; and, in some cases, with less.

In the summer of 1948, over thirty daytime serials were being broadcast each weekday over CBS and NBC alone.

Now, why would anyone be willingly subjected to such programs? Why, to have something to say about them, of course. Stating his “reason for wanting to listen to all the serials,” Rowe explained:

First, I hoped to have as many examples as possible to substantiate and illustrate any conclusions I reached; and also, I wished to be able to write authoritatively about all the serials offered on a nation-wide network and determine the range and variety they represented. Far too much criticism is made of radio which is based on too little actual knowledge of the medium and its programs. In auditing all the radio serials, I hoped to be able to avoid sweeping generalizations which overlooked significant exceptions.

Yes, this is how writing about radio needs to start: with listening. Which, alas, is precisely why I have to remain silent about poor Stella Dallas and her sudsy sisterhood . . .