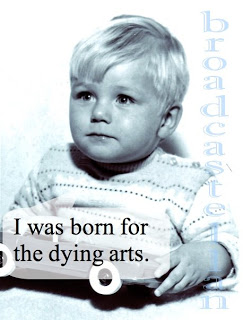 I am, in the words of a fellow webjournalist, “a child of television.” Being a latchkey kid, the TV set was a surrogate parent to me. It was around. It talked to me. And when it began to bore or annoy me, I had sufficient force in my little finger to evade its glare. True, during my early childhood, Germany had only two television channels (father and mother, you might say) and programming did not start until mid-afternoon; but it still came home earlier than my parents. At night, when I was assumed to be sleeping, I re-enacted what I had seen and played out stories with whatever I could lay my hands on. And those hands were greedy enough to grab at straws, or less.

When separated from my folks during a three-months stay at a sanatorium (I was a sickly child suffering from chronic bronchitis), I was so thirsty to satisfy my artistic impulses that I used saliva to draw images on the bed linen, for which offense I was rebuked by the nurses who, lacking both the imagination and the sense of humor to appreciate such spitting images, accused me of having wetted my quarters. I could have done that by crying; it was the only sound to penetrate the nightly silence.

Breathless as I was, I retreated into an inner world, imagining my ear to be a knob at the turning of which I could talk to the animals. Stuffed animals, that is. No sounds were made; we communicated without utterance. That way, I did not have to speak on their behalf, but could believe them to be responding without feeling quite so pathetically lonely. For the most part, my imaginings remained non-aural. I created motion pictures using rolls of adding machine paper my mother brought home from work; I invented cartoon characters and penned stories the moment I learned to make letters add up to words.

It was only after we moved into our own house, the house my father built for us, that I got intimately acquainted with that old-fashioned kind of television for which you supplied the picture. I got a radio. Not the enormous console that stood in my grandparents’ dining room, but a portable one with a built-in tape recorder. Soon I got carried away by sounds and thrilled to foreign voices.

I was not easily weaned off TV, though.  Once in a while, when I was assumed to be sleeping, I attempted to watch television through my binoculars (ours was an L-shaped house, and from my window I could peep into the living room); but gradually I learned to make the most of the wireless. Before my English was good enough to understand what was being said, I tuned in to the British Forces Broadcasting Service; I intercepted citizens’ band radio conversations and went dxing in search of faraway stations.

Yet what really awakened my love for the drama of sound was not the radio at all—it was a gadget my father insisted on installing in our house. It was an intercom. Now, our bungalow was hardly large enough to warrant such a device; but Papa was a professional electrician and avid hobbyist, aside from being somewhat of a show-off. While we were certainly not above shouting at each other, the family had to have an intercom (and, come to think of it, we had it before we got our first phone). It did not make us communicate any better; but it was certainly an interesting feature.

One night, when the wallpaper in my room (my very own room!) had not yet lost the smell of incomplete attachment, my father was ready to put the talking machine to the test it. He went into the kitchen, the control center from which we could all be summoned to the table and, I became aware later, monitored in our doings, provided we weren’t hush-hush about them or dared to switch off, suggesting we had something to conceal. Then he pressed a button and started talking to me as I was lying in bed. We chatted for a while; but, knowing my father close by and not being used to holding longer conversations with him, the novelty of the exchange soon wore off . . . until Papa hit on an exciting idea.

He went “off the air” for a while, during which time he rummaged through the kitchen drawers. I could hear as much through the closed doors; but my ear was fixed on that cream-colored box on the wall. Then it went on again; and the next sound I heard was not my father’s voice, but . . . what? The splank of a spoon in a pot, the sploshing of water in a glass, the swooshing of a tea towel being flung through space? Sounds. Mundane yet suddenly magical. And while I was invited to guess their origins, I also imagined their destination. I heard a church bell where others saw a pot, found an ocean in a cup, and saw, not a tea towel, but a dragon spreading its giant wings.

It was this little sound effects quiz that brought home a new world to me. Once I realized that there did not have to be a single right answer to those sonic puzzles, there opened up a realm of noisy possibilities. Sounds divorced from their maker, ready to be imbued with a new, almost independent life. Sounds waiting to be taken in like stray kittens, to be dispatched like carrier pigeons. Those were the sounds of latchkey child longing . . .