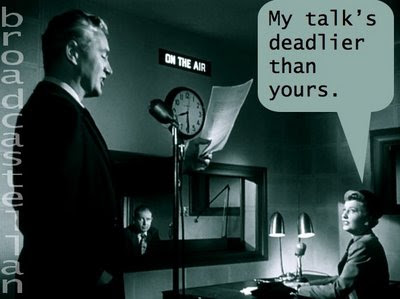 She played tougher than anyone else in pictures, and she was better at it. She could get a guy to fall for her and a fall guy to do anything for her, be it to lie, cheat, or kill. To please her was a dangerous game; but to displease her was a deadly one. She could make puppets of men; Charlie McCarthy was just target practice. I’m talking Barbara “Baby Face” Stanwyck, of course, the kind of social climber who pushed the ladder right into the face of those who lined up to give a gal a helping hand. In To Please a Lady (1950), Stanwyck proved that her very lips could kill. Well, as newspaper columnist Regina Forbes, Stanwyck had the means to do it properly: a microphone, a broadcasting studio, and a weekly radio program.

To Please a Lady makes you wonder just what Stanwyck could have done with a regular radio broadcast; she certainly could have out-Hoppered—and, out-Hoopered—Hedda, who just didn’t have the voice to match her name. “But you can’t go to Newark tonight,” her secretary exclaims as Regina Forbes rushes out to get a story that peeked her interest. Never mind that she already had an appointment with “Margaret.” “What about Margaret?” Forbes asks. “You know,” she is reminded, “the one who sings.” That, of course, was the aforementioned Margaret Truman, the President’s daughter. And Forbes had no qualms about standing her up to get the dirt on a disgraced speed racer (smug-as-ever Clark Gable), who, like Forbes, stops at nothing to be first at the finish line.

To Please a Lady is a contrived story, and one that is told none too well. So, as the camera follows Gable for another spin around the track, you get to fantasize about Stanwyck’s voice and the radio and . . . hang on, there’s Ted Husing. Best known for his sportscast, the CBS announcer was also heard on an early Eddie Cantor program and its successor Rhythm at Eight, starring Ethel Merman; an excerpt of a routine for the latter is reprinted in Husing’s book Ten Years Before the Mike (1935). Of the “grand trouper” Merman, Husing says:

While admitting that television will double her value as a radio performer, I still think she is radiates personality over the air. Her speaking voice is vibrant with health and youth, and is highly individual, while her singing tones are thrilling. What more can you ask of a radio personality?

Television doubling the value of a radio performer? Obviously, this was written before radio took the corner around which it was assumed to be lurking all those years. And when it got there, round that bend, it crushed the competition. While radio was still not yet quite defeated as a dramatic medium back in 1950, there are signs of an impending crash in To Please a Lady. Forbes may still have her radio program, and Gable as an avid listener, but she gets her news from television, which introduces her to Gable’s mug and convinces her to rush out to interview him. She may still be in a position to knock them dead with the lashings of her tongue—inducing one of her victims to commit suicide—but it is television that is giving her ideas.

Voices like Husing’s were fast becoming a mere adjunct to the flickering images on the small screen, filled as it was with the dust in which it left the art of giving you a mind’s eye view of it all through speech alone. You know, the thousand-and-one words it presumably takes to approximate a single picture. My Eyes Are in My Heart, Husing told his former listeners in his second autobiography. And so they were. The book was written after he had gone blind.

One Reply to “Radio at the Movies: To Please a Lady”