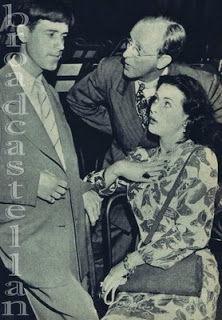 “Are you willing to undertake a dangerous mission behind the enemy lines, knowing you may never return alive.” Thus opens Cloak and Dagger, an early-1950s radio series dramatizing the experiences of OSS (Office of Strategic Services) agents during World War II, “ordinary citizens who to this question answered ‘Yes.’” On this day, 27 August, in 1950, Cloak and Dagger presented “The Black Radio,” a story “suggested by actual incidents” concerning an “OSS agent who broadcast allied propaganda from behind enemy lines.” A radio thriller about radio? I had to tune in, of course, but got distracted by a little incident very early in the story.

Narrated by Larry Haines as Major Mark Lange, “The Black Radio” opens in the “big gadget room” at the OSS headquarters in Washington. It is a quiet day when, all of a sudden, one of Lange’s colleagues grabs his arm and, warning him about an air raid, detonates a small device in his waste basket. Just a prank among co-workers. The latest OSS gadget, Lange learns, is “a little noisemaker” about the size of a lemon, “great if you are in a tight spot and want to start a riot,” his colleague laughs. “We call it the Hedy Lamarr.”

The real Hedy Lamarr, of course, was more than a “little noisemaker.” Not only was she an accomplished Hollywood actress, but an inventor as well. Together with theaforementioned composer George Antheil,, Lamarr (seen above with Ish Kabibble and Kay Kyser at a Command Performance broadcast) developed a patented radio control for torpedoes, based on the principle of “frequency hopping”; but the navy would not have anything to do with the invention . . . at least not until the patent had expired.

And yet, “The Black Radio,” along with a few other episode of Cloak and Dagger, is not the kind of he-man adventure you might expect from a series so titled. It was penned by short story writer Winifred Wolfe, who, aside from being for a time the head writer for the television soap opera As the World Turns, became known for her stories about career women. “Ask Any Girl”—she knew their stories. Perhaps, Wolfe was merely commenting on the sexism in the work field when she exploded that little crack about Lamarr. “The Black Radio” does have a formidable woman at its center.

Major Lange is sent to Germany to weaken resistance with black propaganda by cutting in on the local Nazi stations to tell the people of Freiburg the kind of stuff the OSS wants them to hear. This was to prepare for the US invasion of Germany. The “Black Radio” in that strategic region was already manned, Lange learns. Or, rather, it was womanned—and the agent, Lucille, has not been heard from in over three months.

Our narrator begins to fantasize about Lucille, imagining her to be young and beautiful. It is here that Wolfe plays a trick on the Haines and the audience—for Lucille has “neither been slim nor young for longer than [she] can remember.” She once “taught history in grade school; now she was “helping to make it.” For this, she is prepared to die.

A well-crafted episode in the Cloak and Dagger series, “The Black Radio” recalls Charles J. Rolo’s reports on the “pirate stations” broadcasting in “defiance of the Nazis.” In Radio Goes to War (1942), a signed copy of which is in my library, Rolo “recount[s] episodes in the melodrama” of what he calls “one of the most thrilling chapters in the history of underground movement.”

Ever since the outbreak of war, mysterious voices supposedly broadcasting from within Nazi-controlled territory have periodically been picked up by vigilant listeners. [. . .] If any of these stations was really operated inside of occupied Europe, it was a suicide venture. Modern technical equipment makes it an easy matter for engineers of the German radio to detect the whereabouts of a bootleg transmitter.

“The Black Radio” and its operators do not escape detection. Featuring the voices of Barry Kroeger (as a Gestapo clerk), German-born Stefan Schnabel, and Adolf Hitler (in newsreel footage), the play is rendered particularly poignant by the casting of Lucille. Heard in the role is Hungarian-born stage actress Lili Darvas, the Tony-Award nominated wife of playwright Ferenc Molnar, with whom she was forced to emigrate to the United States in the 1930s. Wolfe’s play gave Darvas an opportunity to impersonate a freedom broadcaster making some noise from within.

As it turns out, Wolfe reserved a strong supporting role as well for “Hedy Lamarr. The “little noisemaker” ends up creating a riot in the place where most people would expect Lamarr to work her magic: in a crowded movie theater.