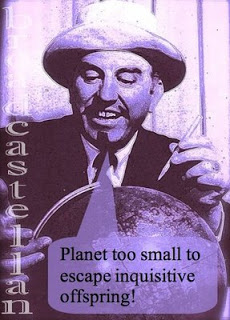 Earlier today, I added a few titles to our movie database, a list I try to keep up to date so as not to lose track of our collection. Yesterday, the fifth and final Charlie Chan box set arrived in the mail, containing the seven last entries into the 20th Century Fox series. Among them are some of my favorites: Charlie Chan at the Wax Museum, Castle in the Desert, and Dead Men Tell. Ever since I discovered these movies on German television—in German, mind you—I have been inordinately fond of the much-traveled sleuth, no matter how ramshackle his vehicles.

As I shared here a few years ago, I never enjoyed a close relationship with my father, long since departed, and the Chan pictures somehow made me, an introvert teenager, long for the kind of bond grown-up sons number one and two maintained with their gentle and generous pop. Charmed by the series, I picked up Earl Derr Biggers’s Chan novels . . . and was greatly disappointed. Biggers, whose Seven Keys to Baldpate was being presented on the Lux Radio Theatre on this day, 26 September, in 1938 (as already discussed here) may have been the father of Charlie Chan, but the brainchild, like Frankenstein before him, was passed around so often and given so many transformations that few recalled or bothered with his origins. After the author’s death, there followed such a long line of foster parents that hardly any of the family traits and characteristics can still be traced in the child. Shown above, for instance, is radio Chan Ed Begley (in a picture freely adapted from its source).

Some folks, though, remember. One of them was mystery writer Rex Stout. On this day in 1939, Stout appeared on the quiz program Information, Please! (discussed here) and, along with his fellow panelists, was called upon to answer a number of mystery related questions. In a task posed by a listener from Morristown, Pennsylvania, the panelists were to name heroes of crime fiction who were aided in their detective work by their fathers, their offspring, and their secretaries.

Clearly, this was a subject of which mystery writer Rex Stout could be expected to be familiar. Sure enough, the father of Nero Wolfe was quick to identify Ellery Queen’s paternal helpmate. “I’d hate to ask you to mention the actual titles of books by one of your rivals,” host Clifton Fadiman remarked, “but could you name, er, one or two of Mr. Queen’s books?” He should have said, Messrs. Queen, of course; but never mind. At any rate, a straight answer from the competitor was not forthcoming, aside from the sly reply “The Adventures of Ellery Queen,” the title of the radio series based on the character but not penned by its creators.

When it came to naming a crime-solving father being assisted by his son, Stout shrouded himself in silence. It’s a “series of books,” Fadiman assisted, that had been successfully adapted for the screen. “Charlie Chan,” fellow panelist Carl Van Doren replied. “Quite right,” said Fadiman. To be sure, the word “assisted” is rather questionable; for, as Chan remarked in Murder over New York (also part of the abovementioned collection), “many cases would have been solved much sooner” had son Jimmy not insisted on getting involved.

Fadiman was ready to move on; but Stout voiced his disagreement. “Pardon me, Mr. Fadiman,” he interjected, “not in any of his books was he aided by his son, except that his son laced up his shoes or something for him.” “That’s a help,” said the host, brushing aside the objection without giving it any consideration. “Korrektur bitte,” Chan’s German alter ego might well have protested, however mildly. Stout was right. The father-son relationship was created for the movies so as to give the rather austere Chan his Watsonian sidekick.

And very glad I am for this infidelity and the wayward child thus begot. “Does anyone help Nero Wolfe in your own series of stories, Mr. Stout,” Fadiman inquired. “I do, pretty often,” he quipped, missing out on a chance to give Archie Goodwin his due. Not long after the Information, Please broadcast, at a time when even Charlie Chan was enlisted into the Secret Service, Stout turned “lie detective” to expose the misinformation, spread through enemy propaganda, in a series titled Our Secret Weapon.