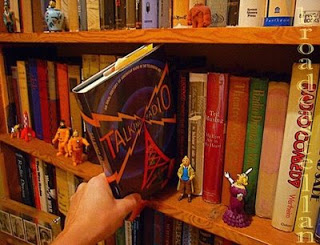 “The importance of the ‘word’ was lost when television took over the living rooms of America. Sure, there were plenty of trivial programs on radio at the time, but there were also brilliance and creativity that have never been equaled by television.” This is how Pulitzer Prize-winning oral historian Studs Terkel (1912-2008) summed up the decline in our regard for and funding of the medium in which he, as an interviewer, excelled. “The arrival of television was a horrendous thing for the medium of radio,” Terkel told Michael C. Keith, editor of Talking Radio (2000). “It was devastating for the radio artists as well as the public. Television was a very poor replacement.”

In the late 1940s, when radio had not yet been superseded by television in all but talk and music, Terkel was frequently heard on Destination Freedom, a history program dramatizing the stories of America’s negro people, including notable Americans like Joe Louis, Richard Wright, and Jackie Robinson.

Tonight, BBC Radio 4’s Archive Hour (in a broadcast available online until 5 December 2008) brings back the life of the legendary voice of the Bronx-born and Chicago-bred journalist. “Studs Terkel: Back in the Wax Museum” delves into the late historian’s personal collection of some seven thousand hours of recordings that he donated to the sound archive of the Chicago Historical Society; these interviews represent nearly half a century of broadcasting. As documentarian Alan Dein puts it, Terkel is the “undisputed hero and the modern pioneer of what we now know as oral history, the art of exploring living memory.”

To Terkel, America was deficient in memory, as well as the respect for its inconstancy; so, whether he interviewed and recorded noted figures of his day or the “so-called ordinary people”—workers, civilians, survivors of war—who could not count on a public platform elsewhere, Terkel did much to prevent listeners from forgetting. Among the voices heard on the program, aside form Stud’s own, are those of beat poet Allen Ginsberg, Canadian-American economist John Kenneth Galbraith, film star Joan Crawford, fan dancer Sally Rand, Algonquin Round Table wit Dorothy Parker, Vietnam veteran Ron Kovic, feminist Simone de Beauvoir, philosopher Bertrand Russell (interviewed at his home in Wales), Irish street singer Margaret Barry, the Reverend Martin Luther King, Jr., African-American journalist Vernon Jarrett, and gospel singer Mahalia Jackson venting her frustrations without song. “I haven’t the vaguest idea” how to operate a tape recorder, Terkel once confessed. “Yet, it is my right arm,” he marveled.

According to Terkel, who was discharged from military due to a perforated eardrum, the advent of television was “forcing radio to reinvent itself into something not quite as good”; but, the loss of radio dramatics notwithstanding, the audio documentary was surely the very best way in which to reinvigorate the airwaves. “Stud’s Place” was Terkel’s foray into television back in 1949 (cut short due to anti-Communist hysteria); but it was radio that remained his true domain.