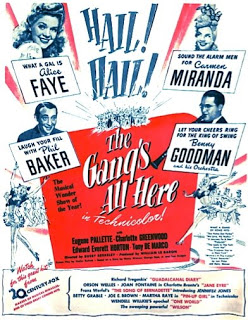 So iconic is this technicolorful Latina that she might not strike you, on the face of it, as the ideal subject for a sound-only documentary; but there she is, the life of Russell Davies’s “Carmen Miranda: The Lady in the Tutti Frutti Hat.” Once you remove that hat, you will find much to tip yours to as you listen to Ruby Wax, assisted by biographers Helena Solberg and Martha Gil-Montero, unravel the story of Maria do Carmo Miranda da Cunha, born one hundred years ago in the small town of Marco de Canaveses, Portugal. As Carmen Miranda, she came to represent not just her non-native Brazil, to which her family emigrated, but the whole of Latin America; and while what she became was larger-than-life, the “Brazilian bombshell” was not quite so large as to cover—or level—quite so much ground. It is the leveling that those proud of their origins and culture resent—and Brazilians, in particular, came to dismiss Hollywood’s All South-American girl as inauthentic, irregular, and downright ignominious.

The United States, of course, was counting on what it hoped to be a Pan-American appeal; it is what made the former milliner’s apprentice such a sought-after commodity during the Second World War. At the end of the war, she was reputedly the highest paid woman in the United States.

A romance born of hardship and ingenuity, a glittering success tarnished by rejection, an identity challenged by dislocation and enfranchisement, a glamorous life culminating in early death, the one-of-a-kind yet kind of universal story of “The Lady in the Tutti Frutti Hat” is the stuff of legend. Sure enough, that is what, according to the Internet Movie Database is what is about to come out of Hollywood any day now: Maracas: The Carmen Miranda Story.

The samba-infused first installment of this three-parter makes ample use of original recordings to highlight the performer’s early musical career. Considering that the next chapter is going to transport listeners from Rio to Hollywood, I wonder whether it is going to draw on the one source that, aside from shellac, is best suited to the medium—the sounds of Carmen Miranda’s life on the air: her samba lesson for Orson Welles; her dramatic scenes with Charlie McCarthy, or her joking with Tallulah Bankhead, Judy Holliday and Rex Harrison on The Big Show. Never mind that hat. She was the Lady with the Tutti Frutti voice, which is why she had her own radio program down south.

Carmen Miranda died on 4 August 1955, within hours after suffering a heart attack while performing on Jimmy Durante’s live television program. Could it be that our demand for visuals, our insistence to be shown what can be heard and felt more keenly in darkness, is what caused Carmen Miranda’s heart to stop its rhythmic beatings? A program like “The Lady in the Tutti Frutti Hat” offers us a chance to bring her into our presence, take her in as the voice, the breath that gave her life. We only need to make the effort to be all ears . . .